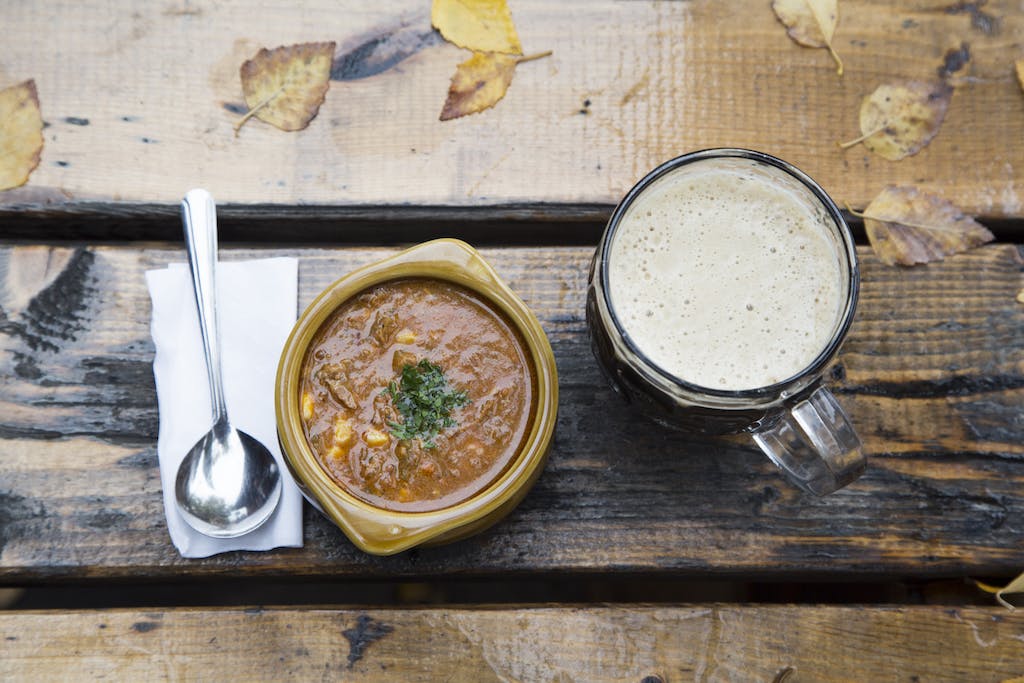 As the holidays draw near and the weather continues to get colder, we tend to seek out that which is warm and familiar. There’s nothing more comforting during these cold-weather months than a bowl of Kentucky burgoo. Jordan Delewis, Executive Chef and Pitmaster at the Against the Grain, would agree with this wholeheartedly. Delewis sees a lot more in burgoo than a simple Kentucky classic. So we sat down with Chef to talk about the history, process, and what makes burgoo uniquely Kentuckian.

Ashley Paul: How would you describe burgoo?

Jordan Delewis: burgoo is essentially a scrap stew. The origin is unknown, but a majority of the older recipes are from the Owensboro, KY area. And even within those counties, the burgoo is very different. Some are more pork heavy, some more beef heavy. Originally it was made with rabbit, squirrel, and opossum. In recent years, it has featured more leftover meats, and for us at Against the Grain, a BBQ stew. One of the best things about burgoo is that you can make it whatever you want to make it.

Ashley Paul: What makes our burgoo different than others?

Jordan Delewis: Burgoo has a few basic things: vegetables, meat, and a brothy soup. Where ours is a little different is our broth. Our broth cooks for two days, with pork shoulder bones. We also blend raw potatoes with tomato juice to create a raw potato paste, and we use that to thicken our soup. As it cooks, it also has that delicious starchy potato flavor. So where our burgoo shines is an awesome mouthfeel and our secret spice blend. 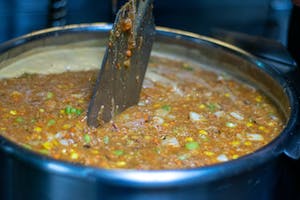 Ashley Paul: When you created the Smokehouse menu, why did you think it was important to include burgoo?

Jordan Delewis: So burgoo is one of the first things that I ever ate at Mark’s Feed Store, a restaurant where I used to work. I always thought it was such a cool idea, and so I researched it, and there aren’t many details about it other than a basic recipe. It is made mostly by churches, not restaurants. I wanted to have something that was known for being from Kentucky, but not usually found in the city. Rural area flavors now served in the big city. And it’s just fucking good. To me, it’s the perfect soup. It’s a very versatile thing.

Ashley Paul: What about Kentucky BBQ as a whole can we learn from burgoo?

Jordan Delewis: I think the idea of Kentucky BBQ is using up all of a product and making a delicious meal, that’s kind of the overall message of burgoo. It’s this thing where you’re utilizing everything you have at your disposal to make a meal for someone. BBQ is a very simple thing. Simple cooking with simple seasoning. Just like a traditional burgoo. Our burgoo is simple meets complex. It’s supposed to be this dump and leave kind of stew, and we dissect that and turn it on its head a little bit with our broth.

Kentucky BBQ is this simple, passionate thing. We’re not using anything that you can’t get at the store, but it’s how you take care of those products and treat those products that make our BBQ shine. BBQ is 90% wood, ya know? The term “burn” is not one that you hear taking care of a slow product, but you have to burn this wood that you have to cook meat over to have the perfect tender product.

BBQ is learning how to burn the wood, you can put a piece of meat with salt on fire, and it’ll taste great. But if you never learn how to, then you’re no good. I love how, and I hate to use this term, but I love how ‘against the grain’ Kentucky BBQ is, that’s what I love about food. And you can taste all of that in our burgoo – this simple stew, using simple techniques. 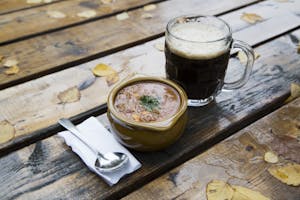 You can try our burgoo made with pork, beef, chicken, loads of veggies, and of course our secret spices, by the cup or bowl any time at Against the Grain Brewery and Smokehouse!

On the Upside: November
Barleywine: The Other Winter Beer