The History of Citra Ass Down 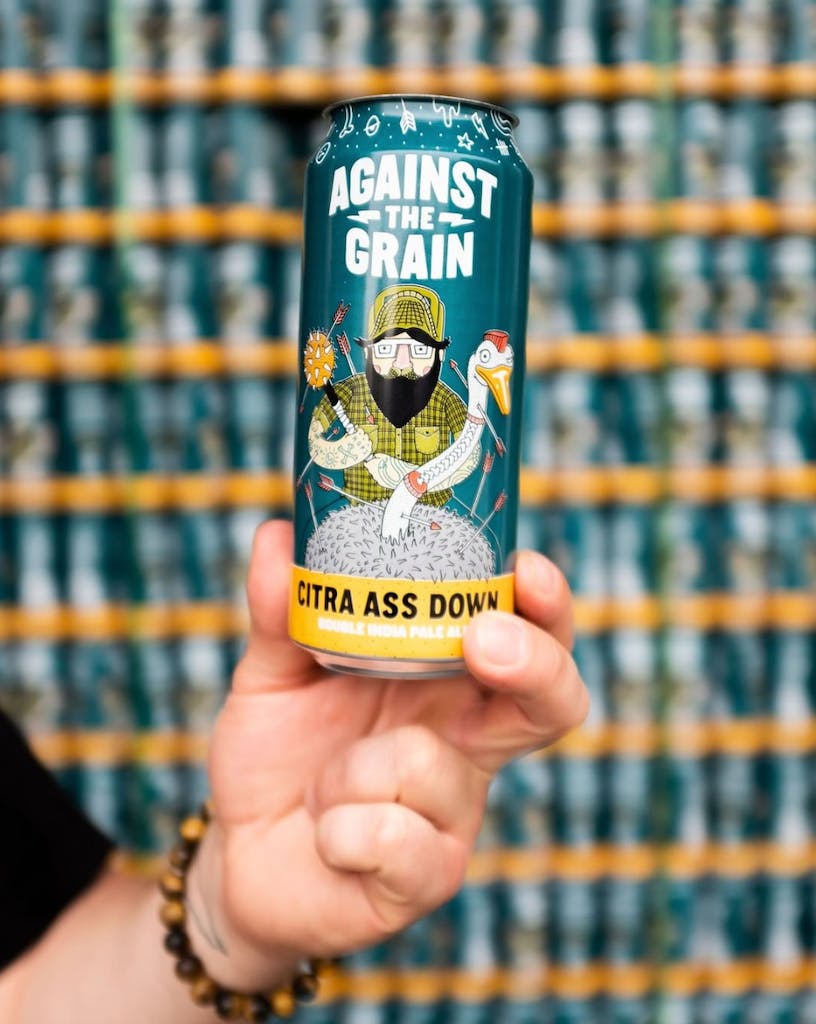 Not every brand can make the word “ass” iconic.  It takes a certain team and a certain beer at a certain time in craft beer for those stars to align. So here’s Sam Cruz, Co-founder, and co-owner of Against the Grain, to tell the history of Citra Ass Down, one of craft beer’s best Double IPAs.

Ashley (AtG Social Media Specialist): When Citra Ass Down premiered, did you think it would be our most popular brand?

Sam: No. I mean, we didn’t think anything was going to be our most popular beer. We made Citra Ass Down because we got a hold of a little bit of Citra hops. And at the time, it was all the rage to use those hops. We wanted something to accentuate the Citra flavor. But we realized we didn’t have enough of those hops. And we couldn’t possibly get more.

Why couldn’t you get any more?

Just because they were the hottest thing at the time, you couldn’t get a hold of the hops. Instead, being the ambitious and resourceful people that we were, we decided if we can’t get the Citra hops, then we’ll make the flavor. Which is something as brewers we’ve always been good at [creating a specific flavor profile]. It’s been a long time, almost eight years, and if memory serves me correctly, Jerry (Against the Grain Co-founder and Brewmaster) ordered a bunch of grapefruit, lemon, oranges, maybe mango juice or something? I feel like there was some juice in there. And from that, Jerry essentially created the Citra hop profile in the beer using zest, and the readily available hops of the day. I think it was Columbus hops. 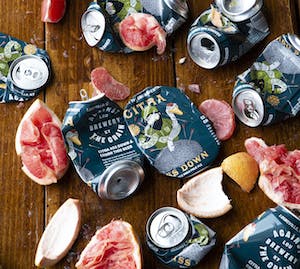 Anyhow, it was such a well-received beer we thought, ‘f*ck, we have to make this again,’ still using the zest. And it became so labor-intensive and horrible to do that we decided we had to get the Citra hops.

So the namesake hop of this beer wasn’t even part of the original process for the beer?

The original process was terrible. And to be honest, I don’t think the beer was as good as it is now. And I think Jerry would agree. We’re much better at it now than we ever were.

And in any case, the name, Citra Ass Down, is nonsense. At that point, not even a year into this, we were still punning real hard. We were using puns all the time with all of our beer names. There was a list of beer names in Jerry’s office on a whiteboard, and some of them were good, and some of them were bad. I didn’t like Citra Ass Down I thought it was crap, but Jerry and Adam (Against the Grain Co-founder and Co-owner), settled on it, and you’d have to ask them to get the other options at the time, but that was the one that resonated with them, and I got outvoted. So it became Citra Ass Down. It’s kind of funny too because I think we were the first restaurant to write the word “ass” on our beer board menu.

Did that ever cause any issues?

It didn’t cause issues, but it certainly set the tone for what we would do. 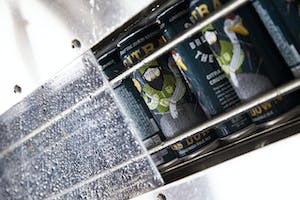 In other words, it was a net gain, right? Because even if someone was bothered by it, it eventually became one of the most iconic elements of our brand.

Oh yeah. It was very much a situation where, if Against the Grain will say “ass” what else will they do? It set the tone for us as a brewery. It became such a popular beer that we decided we would have to package it. Everyone loves an IPA. That has to be one that we can sell.

How did all the elements come together for the label?

For the label, at the time, we were hanging out and doing collaborative projects with a Belgian brewer named Urbain Coutteau at Struise Brewery. The logo for his brand is an ostrich because he had an ostrich farm. Well, he’s a f*cking maniac, he’s crazy, and had a place in our head at the time. So when we were trying to figure out what the label should look like for this beer, I said you know this name means nothing, so we should have a nonsensical label. How about we have Hop, our hopster character, on the label riding into a war on an ostrich? Adam was about it right away, and he thought Hop should have a sword. I said no, let’s give him a machine gun, but Robby (Citra Ass Down label artist) refused to draw a machine gun. 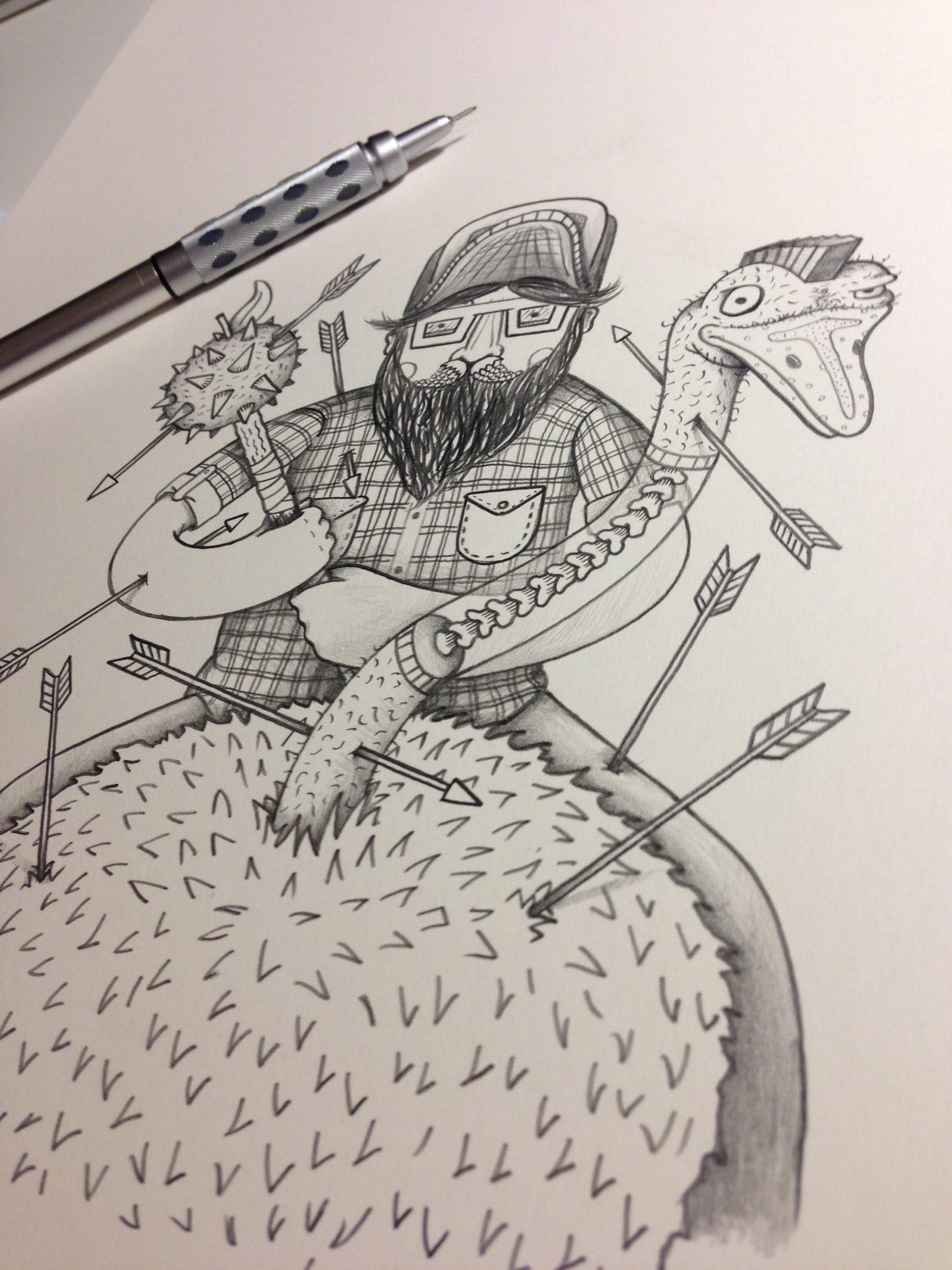 Well, it sounds like it worked out in the end.

Yeah, now he’s carrying a mace with arrows all around him from the war. But the mace makes a lot of sense because it has that orange on there. And it was intended to be an orange, it had a leaf on there initially, but the TTB made us take the leaf off because there is no orange in the actual beer. 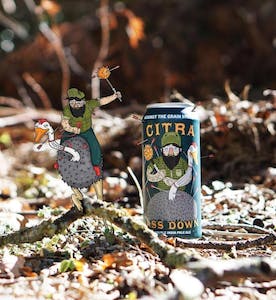 Has Citra Ass Down won any awards?

Yeah, the key to my heart. In fact, you’ve inspired to go have one right now.

Now, I have one more incredibly important question for you. If you had to guess how many Citras have you drank in the last eight years?