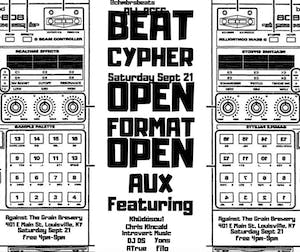 The beat cypher is a concept similar to a rap cypher except for producers. An invitation to the beat cypher is sent to the producer community inviting them to show up and run their beats down on an open aux cord. Ideally the flow of the cypher would have two or three, more experienced producers having a ‘headlining’ spot where they can play their music un-interrupted for a set amount of time. Then between those sets other producers who show up are given space to play their music.

The goal with this project is to make space for producers to network and have a platform to share their work.

Chmbrs wil have mic’s available but will leave it up to each producer whether or not they will allow anyone to use it during their set.

Back to all events